So excited to share with you the cover design of Messianic Reveal! Electronic release in November to be followed by bookstore rollout in February. It is happening! 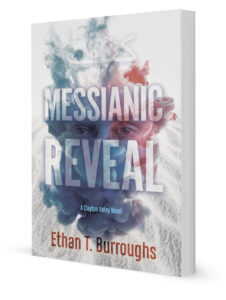 Writing this novel, the first of three (so far) enabled me to share snippets of my experiences and observations of my twenty year sojourn in the Middle East.  I’d love to take credit for the story, but honestly and mysteriously, it wrote itself.  I hope that it will serve as a useful guide to folks who have struggled to understand why the region has dominated our headlines for decades, and perhaps, provide a connection to families of soldiers lost or wounded in our wars there.  Maybe protagonist Clayton Haley’s delving into its intrigue will shed light on the historical, political, and even spiritual realities of the region and why it matters to us.  Spoiler:  There is a Messianic Reveal in the book, but you have no idea what it is!  Can’t wait to share it with you!  ETB

Teaser:  In Messianic Reveal, Clayton Haley, a young United States State Department foreign service officer stumbles upon a set of Muslim world conspiracies that, if realized, will impact relations with key U.S. partners and allies and potentially usher in a new wave of violence in the Middle East. In the course of his consular (visa) interview duties, he meets a man whom he suspects might be connected to the 1979 Grand Mosque siege in Mecca, Saudi Arabia. His persistent queries unravel 40-year old connivings, and millennia of mystery, with implications for present day affairs between Sunni and Shia Muslims, and as a consequence, the United States. The intrigue that he pursues takes him from France to Iraq and then Saudi Arabia, delving into history and religion to understand a potentially very violent future. His persistence and bad luck place him and his friends in mortal danger against the backdrop of a medical technology plot to force the arrival of the long awaited Islamic Messiah.

About the Author: Ethan Burroughs

Ethan T. Burroughs has dedicated much of the last two decades to exploring the Middle East and slowly unraveling its mysteries. His encounters have taken him to Saudi Arabia, Iraq, Jordan, Kuwait, Israel, and the Palestinian Territories where he has studied the history, faith, cuisine, language, and culture of the lands which continue to grab our headlines as we search for an elusive peace. He has had the great pleasure of spending significant time with characters similar to those depicted in his accounts, including our unsung patriots in the Departments of State and Defense. He is a U.S. Army veteran, former teacher, healthcare, business, and political consultant, and aspiring storyteller. Follow him on Facebook, or on Twitter @ETBurroughs.